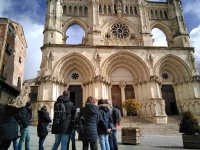 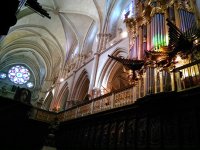 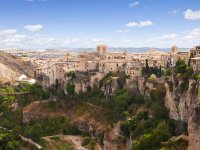 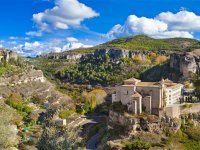 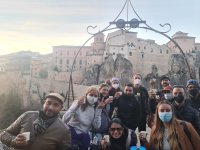 In cuenqueando we have elaborated this experience so that you discover Cuenca like you had never felt it before. A day walking by the museums and most representative corners of the city and, of course, the cathedral of Santa María and San Julián.

Guided visit to Abstract Art Museum, it keeps and permanently exhibits a collection of paintings and sculptures by Spanish artists of the abstract generation of the 50s and 60s, that where part of the most important abstract tendencies in Spain Art in the middle of XX century. The museum opened its doors on July 1, 1966, fruit of the initiative of Fernando Zóbel (Manila, 1924 – Rome, 1984) who in 1980 donated his collection to the Juan March Foundation.

Guided visit to Monumental Cuenca. We will discover the monumental patrimony and historic of the Cuenca City, declared Patrimony of Humanity by the UNESCO, is one of the cities with a material and immaterial wealth of Spain.

The city of Cueca, declared Patrimony of Humanity by the UNESCO, is one of the cities with a material and immaterial wealth of Spain.

Cuenca is landscape city raised on a tongue of land between the sickles of the Júcar and Huécar rivers, which gave a natural incomparable frame to a urbanism anchored in time. These sickles keep locked up a huge historic patrimony that sits between two cliffs, and immersed a city in nature by thousands of years on geological morphology, little by little pierced by these rivers and which it forms a stone structure that dwarfs the one who looks at them.

La Cuenca is a patrimony city that opens to the visitant as a perfect fusion between modern art and tradition, is essential for the traveler to walk the old town, letting get loose for the charming framework streets that came with important samples of religious patrimony as churches, convents, seminaries which you can breathe the entrenched cult tradition of the city, even important museums as the Abstract Art Museum, the Antonio Perez Foundation or the Secret Museum of the cathedral, good example of provincial sacred art were important works are guarded from the Romanic to the actuality, highlighting the art picture of Martin Gomez el Viejo and the Greek. A city of contrasts where the modern and traditional coexist.

The most impressive building in the city, the Cathedral de Nuestra Señora de Gracia, the first of Gotic in Spain was built by the order of Alfonso VII. His wife, Leonor of Aquitaine and Plantagenet, sister of Richard Lionheart, introduces the gothic aires in the cathedral Factory which is considered as the first gothic cathedral of Castilla, being consecrated in 1208 under the patronage of Santa Maria. On the inside, the light effect gets through the stained glass, which it takes the visitant to a mistic walk that does not stop surprising while watching the construction from the XII century to the last Baroque chapel.

The Cathedral visit gets complemented with an impressive view on heights from the Triforium of the Cuenca Cathedral. A small spiral staircase leads the visitor to the cathedral sky. From there we are received for the impressive views of the Cathedral, a singular spectacle that allowed us to appreciate every detail, every corner. Since there, to the exterior will surprise you the main square from the heights, where we can appreciate not just the most of the characteristic buildings of the Old Town also a panoramic view of New City and the Sickle of Jucar, with its impressive reliefs and natural landscapes.

The Treasure Cathedral Museum of Cuenca, designed by the artist Gustave Torner, exhibits more than 200 pieces of great value and singularity, especially in the referred ones to the XVI century. Dedicated rooms to medieval art, the renaissance, and the vault treasure, where also of the craftwork we can find two wonderful works of El Greco, as the Diptico Bizantino Reliquary Icon of the Epiro despots, and a big collection of pencils and carpets.

Of the hanging Cuenca, all the world knows its Hanging Houses, an example of popular Conquense architecture where its balconies invite you to observe the emptiness converting in saint and sign of the city, As its skyscrapers of San Martin, the first buildings with more than 10 floors of the world.

The San Pablo bridge, designed by the Eiffel school, its converts in a walk for the audacious and an adventure for the vertiginous but lets everyone with the same sensation of sitting in one of the best places of the city. The sensation that produces sitting on el Barrio del Castillo where the visitant can feel the city at his feets, because its lookouts appear at the most unheard-of depth.

Inside of the emblematic Hanging Houses, we can find with one of the artistic samples more significative of art in Spain from the XX midcentury: The Abstract Art Museum. The museum exhibits more than a hundred of painting and sculptures, one of the more complete collections of Spanish artists works of the abstract generation of the fifties and sixties, continuation, in a certain way of the renovating ideas that one had had Picasso, Miro, and Gris. In there are represented artists like Canogar, Chillida, Feito, Millares, Oteiza, Tapies, Torner, Zobel.

We cannot forget about the Cuenca Savor, this city is also formed by its singular flavors, its succulent meals, and typical dishes. Is an obligation not leaving without trying their mortar, their garlic grill, porridge or a roast of lamb, and dare - without knowing what it is before - to eat a zarajo, all accompanied by the wines of the land and topped with a sweet based on honey and almonds, the alajú and a revitalizing resoli.

All these Cuencas, the Cuenca patrimony, la Cuenca landscape, the Hanging Cuenca, the Cuenca Savor, the Saint Cuenca…  make the visitant to mmerse in endless sensations, emotions, memories… that everyone who contemplates it falls asleep to such beauty, without a doubt: Cuenca is unique!

Departures every day of the week, upon request

Possibility to modify the excursion at the request of the client

The driver will pick you up in the meeting point. The guide will be there waiting in the destination.

Specified price for group of 40 pax.

10% up to 5 days before the date of the excursion, 30% during the previous 5 days. There will be no right to return in case the traveler does not show up at the departure of the trip.

Price based departures from Madrid. Consult about other origins.